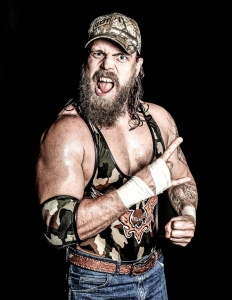 Cody’s story involves overcoming adversity, setting goals, striving to be a positive influence, and putting in the work in order to achieve your dreams. Since a very young age, Cody dared to dream BIG.

Cody grew up in a small beachside hamlet along Lake Erie with a population of less than 200 people. Cody strived to dream BIG despite coming from a small place, and struggled to overcome the temptations of drug and alcohol use while growing up with a home riddled with alcohol abuse and psychological disorders.

At the age of 5, Cody had one goal… to one day wrestle in the same ring as his childhood hero – Hulk Hogan. Despite his smaller size, and a high school guidance counsellor who told him not to pursue a career in professional wrestling, Cody achieved his dream and eventually wrestled for the largest wrestling company in North America, the WWE, and performed in the same ring as his hero, Hulk Hogan.

Cody went on to wrestle on television for millions of viewers in the second largest wrestling company in North America – Total NonStop Action Wrestling. Cody believes “what doesn’t kill you makes you stronger.” He knows this firsthand, as he tells the intense story of the day he almost died in the ring in front of millions of people watching around the world. Eventually, his childhood dream was cut short from the unlikeliest of people – his childhood hero – Hulk Hogan.

Despite all of this, Cody still wrestles all across the world, but now he is his own boss. He speaks to youth about the power of positivity and perseverance. His goal now is to focus on being a positive influence and tells stories of the power of positivity (such as raising $120,000 for a young wrestling fan to finally walk on his own) and doing so all while wrestling alongside his other childhood wrestling heroes, such as Jake “The Snake” Roberts, Ricky “The Dragon” Steamboat, “The Million Dollar Man” Ted Dibiase, and Rey Mysterio.

Cody dares youth to dream BIG… because he definitely did… and he still does.

Workshop Description for “Dare to Dream BIG”
In this workshop, Cody Deaner will tell the story of growing up in a small hamlet with a dream of emulating his childhood hero – Hulk Hogan, and the steps he took to one day accomplish his dream of becoming a professional wrestler.

Cody will discuss how to overcome adversity by setting goals and living with a purpose. Cody will encourage youth with the power of positivity and challenge youth with one simple dare: “Dare to Dream BIG!”